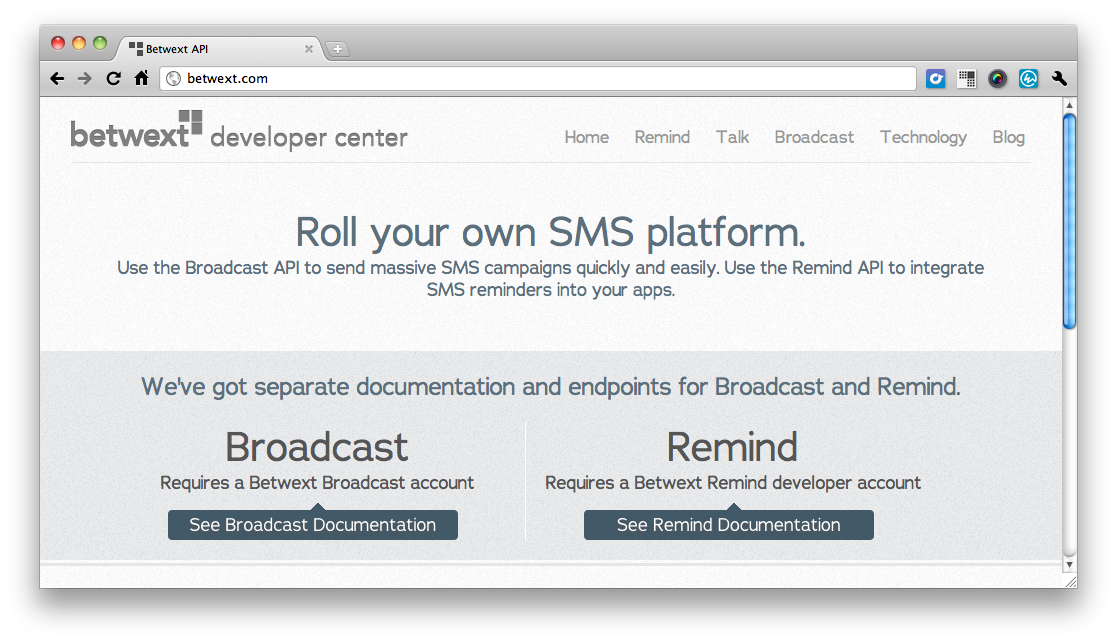 As many of you know, we’re working hard to make the Betwext Remind and Broadcast APIs publicly available. The good news is we’re super close – we’ve already started beta testing the Betwext Remind API, and we’re hoping to see some really cool stuff from developers wanting to integrate SMS reminders into their apps. Betwext Broadcast API is in an alpha stage as we work hard to make documentation awesome and squash any bugs. If you’re a developer and you’re interested in testing either the Broadcast SMS marketing API or the Remind API, contact betwext.com customer service.

GET YOUR FREE REPORT

DOMINATE YOUR COMPETITION WITH SMS MARKETING.
Sign up for the Betwext Texting list and we'll send you Tips, Tricks and Videos on how to best use Text messages for your business.
Simply enter your mobile phone number below to get this valuble Information!
Don't wait... what do you have to lose?

Betwext was built on the foundation that there's a better way to provide long code and sms marketing services. Betwext offers incredibly powerful marketing tools at a fraction of the cost of other services. (Currently US and Canada only). All pricing is in USD.

Brian: WHAT I DO: I help small business owners, small business managers, coaches, trainers, marketing experts, sales executives, and business development pros use Mobile Marketing to connect with prospects and customers and make more sales. HOW I DO IT: I provide information, tips, tricks, and ideas to help you use Mobile Marketing (AKA: SMS Marketing, Text Message Marketing, Group Texting) to communicate with prospects and customers. My company, Betwext.com provides easy to use online text messaging software. WHO I WORK WITH: We have thousands of businesses from every industry group signed up and using Betwext.com! Restaurants, Non-profits, Speakers, Politicians, Car Washes, Private Plane Charters, Night Clubs, Conference Organizers, Delis, Accountants, and Churches (just to name a few) all use Betwext.com to improve communication with their prospects, customers, and even employees! FREE MOBILE MARKETING INFO: Here’s a free, easy to read guide, on Mobile Marketing for Small businesses of all types! The Ultimate Guide to Mobile Marketing Download: http://text.betwext.us/ebook-mobile-marketing/